The patchnotes for this release are immensely long, so I shall include a link to the full patchnotes Here. Below will follow some choice excerpts that are of interest. 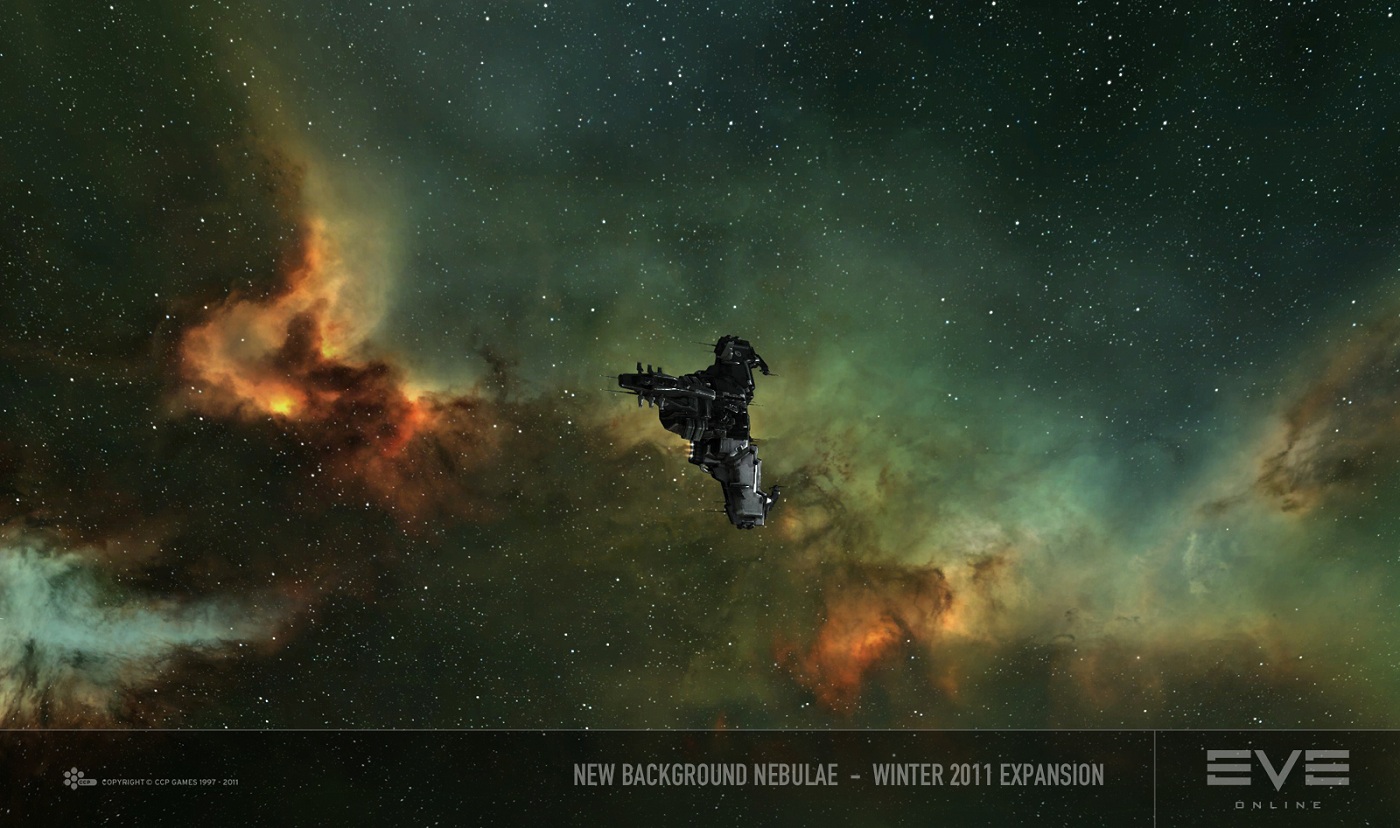 How can one possibly not love this. CCP have made a turn from disrespecting and hugely alienating their core audience to suddenly embracing everything that is awesome about EVE. We were complaining some months ago that the focus in development was going all wrong, as they were focusing more on other games, or features that are not as important to the core gameplay – Such as “Incarna” the famed spacestation simulator they wish to create. Or simply adding game mechanics that in the end weren’t that important, Planetary Interaction comes to mind…

Now however, they have upgraded the already fairly good visuals of the game with stunning views of nebulae all around, different colours, different sizes. Some systems are even in the midst of nebulae, others merely sit at the edge of two, enjoying the kaleidoscope of colour in the midst of the blackness of space. Then of course there is the introduction of tier 3(Not tech 3) battlecruisers, which is a substantial boost to gameplay in and of itself. EVE-players are nerds, big nerds. These nerds tend to find out all the best ways to tweak ships within a short ammount of time, and while things may sometimes change in terms of meta(Which fleet doctrines are best/most used etc.) – They never change as much as when we get some entirely new concepts to play with. New ships with their own fitting-restrictions and their own little niché’s that we get to explore.

In conclusion. It looks awesome, and the ships will make for a lot of fun theorycrafting as far as fleet doctrines on small and large gang levels go. There is also presumably a lot of potential for camping tactics and duo/trio concepts here. New ships = New ways to play Eve.

To illustrate this it will be best to use images. Basically what this means is that the ships now look more awesome. – There are some exceptions where the shader seems to have decided “More dark = Better”, But in the large picture this is an improvement in the appearance of some ships.

The Astarte was a greenish-yellow and gray before. Now it is Dark gray and rustic gold. It’s gone from looking a bit tacky to looking like a stylish deathmachine. I wholeheartedly approve. Similar changes have occured across all sub-capital ships of both Gallente and Caldari origin.

A new font was introduced in this expansion aswell.. a font I am incidentally not very happy with. The problem with it is that they have focused too much on making it possible for people with vision problems to read. – I realise that sounds harsh, but really, you have to consider the design. They have not considered how the game is designed, and that my friends is the problem. The new font is readable, sure, but it takes up a lot more room than the old one, which in a game where everything in the UI needs to be compact, is problematic.

You can read the devblog about the font Here. I hope they optimize it, or allow us to change the size of the font – Potentially even change back to the old one. But for now I’ve had to scale my Ui back 10% to fit everything, which makes some things too small and others just decent enough that it fits. Ironic really that a fix that is supposed to make things more accesible has made the Ui harder to read for us who didn’t struggle initially.

Podmails now show what implants the losing party had in their brain. This is pretty awesome, I can remember people clamouring for this to be added to the game since 2006. Needless to say it’s been a very long time coming, and it is an immensely welcome change as people have never had to worry about the shame that will be displayed when they lose billions of ISK from losing their pod. Now they do!

Additionally, BPC’s and BPO’s will be distinguishable on killmails, BPC here of course standing for “Blueprint Copy” and BPO standing for “Blueprint Original”. The difference is that the copy is simply a one-time copy of the original, and the original is quite expensive. So when people lost ships in the past with blueprints in their cargo holds, the report simply showed that there was a blueprint in the hold. Which either meant that you just destroyed 10 billion ISK, or about 20 million. – It’s a good day in EVE when you can know just how much of your fellow capsuleer’s wealth you have mercilessly destroyed.

The Oneiros, a Gallente logistics cruiser has had a lot of little changes made to it, I won’t go into huge details about this, but it has basically been balanced from being nearly useless in any situation to being quite viable, and on par with the Minmatar Cruiser-equivalent. Which is great! More options in terms of fleet composition can’t hurt us.

All blaster ships were also given quite a boost in this expansion, though it is debatable how much of a realistic boost it was across the board. Some ships have seen their DPS and Effective Hitpoints go up quite noticeably as a result of this, while others simply have some more room for fitting different modules. The changes, specifically were that all blaster ships gained agility(Their inertia modifier was changed) and had their max velocity increased by 5-10m/s. The reason they gained more fitting room and capacitor is that their guns now use less energy to discharge and much less room to fit in terms of Powergrid and CPU on the ships themselves. This results in being able to use bigger guns, or to gain more tank in many cases.

Well.. too much for me to mention, frankly. But many little fixes to problems, Destroyers have for instance been buffed so they are more in line with the expectations of their ship class, Cynosural fields had their effects changed to something much prettier – A long called for change, The Raven battleship was for some reason remodelled…  Still looks just like a raven to me, But that happened. Aaand many, many little changes to how Corporations work, starbases, Capital ships, Ammunition and Modules.

Basically CCP did a good job on this one. I just hope they keep it up. I don’t want to find myself having to complain about them ignoring the community in the next few patches – As I had to in the last few. This one was good. Keep up the good work, CCP.